This motorcycle runs on air

The O2 Pursuit has a top speed of 87 mph and can go 62 miles on one standard SCUBA tank full of compressed air. In other words, it’s as fast as an electric motorbike, with a similar range, and you don’t have to wait hours for its batteries to charge....( read more )
Posted by Occupy Sydney at 04:24 No comments: Links to this post 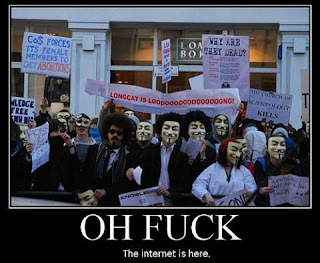 invites Sydney citizens to air their grievances with their parliament.
When?November 5th,2012
Where? Occupy Sydney,
Martin Place
Time? Snap Actions 11am - late
Why? Because there Is something terribly wrong with this country...
#NationalSecurityMeasures #BudgetCuts #LimitedFreeSpeech #HumanRightsAbuses #UraniumSalesToIndia #CoalSeamGas #Corruption * Today, let us be loud and clear. CHANGE is coming...

Posted by Occupy Sydney at 14:31 No comments: Links to this post

Occupy Sydney participants are flabbergasted but unsurprised as the now DOCS run State Government social housing provider Housing NSW -the largest landlord in NSW - tries to evict 19 year tenant , single parent Libby Ciesiolka from her home. Why?? Because she objects to their extortionate demand that Libby pay 50% of her gross income in rent. Despite several calls to Housing NSW and Minister Pru Gowards Office, Housing NSW or the NSW Government refuse to comment on this case or answer how many similar draconian cases are on Housing NSWs books.

Libby is a dedicated drug free single mum who has dedicated much of her past 20 years to the challenging task of raising 2 beautifully raised children in the oft challenging environment of a NSW HouseO Estate. She has been a sometimes outspoken advocate for educational and other local issues which affect her community.

At Occupy Sydney we strongly suspect that it is her outspokenness which causes her landlord to curiously dismiss her clearly relevant income documentation in favour of its own version of her income as more government departments act to terrorise the population into silence.

According to NSW Housing, these government generated statements are rejected evidence of income:
• First Employment Income Details: This document was rejected as incomplete by CSO Nik on 7 August 2012 because it did not state income per week and was not marked with a Company Seal.
• Second Employment Income Details: stating income per week as $385.58 and marked with the Company Seal
• Letter from Child Support Agency stating that entitlement to Child Support would cease on 18 November 2011.
• Child Support Agency Certificate under ss.116(2) of the Child Support (Registration and Collection) Act 1988 (Cth): showing that child support remains unpaid.
• Centrelink Income Statement: 7 August stating eligibility for Family Assistance but that no income is received fortnightly it is received as a lump sum at the end of the financial year.
Libby’s son:
• PAYG income tax statement 2012 and 2011 with 2012 showing that Libby’s son’s income averages $71.83 per week.

Libby contends (and we agree that this is a fair minded viewpoint. Libby & the People demand that Housing NSW apply common sense , not draconian tyranny in its dealings with tenants.

YOUR ACTION CAN SAVE LIBBY

Posted by Occupy Sydney at 13:38 No comments: Links to this post

Occupy Sydney express our solidarity with Occupy Melbourne and continue with our joint Constitutional challenge against the use by the State of Police as an instrument to suppress political dissent.

New Report Discusses the Effects and Legality of the Occupy Melbourne Eviction from City Square on 21 October 2011
One year on from the controversial eviction of Occupy Melbourne from the City Square a qualitative Report, Occupy Policing: A Report into the Effects and Legality of the Eviction of Occupy Melbourne from City Square on 21 October 2011, documents protesters’ experiences of policing. The Report complements these eye-witness accounts with an account of the relevant laws.
The Report makes several key findings including:
The Report’s recommendations reiterate previous calls for an Independent Inquiry into the forcible removal of Occupy Melbourne.
The Report is published by the Occupy Melbourne Legal Support Team and is endorsed by Flemington and Kensington Community Legal Centre, and the National Police Accountability Project. It includes forewords from Cr Cathy Oke (Melbourne City Council) and Tamar Hopkins (Principal Solicitor, Flemington and Kensington Community Legal Centre).
‘The level of police violence on the 21 October 2011 shocked the national and international community. The experiences documented in this Report speak to excessive and unnecessary levels of violence,’ said Rhys Aconley-Jones, Report co-author.
‘The widespread and public inquiry called for by the Occupy Melbourne Legal Support Team to look at all levels of decision-making into the policing of the protest is not only necessary to restore the community's faith that the rule of law still operates in Victoria, but is required under international human rights law where allegations of human rights abuses have been made,’ Tamar Hopkins writes.
The Report is also available at: www.occupypolicing.org
Posted by Occupy Sydney at 10:41 No comments: Links to this post