In solidarity with Occupy Movements around the world and responding to the call for ALL Occupy Movements to reassemble at their original occupation sites,to hold a candlelight vigil then move to a Protest site of choice. Occupy Sydney supporters and Occupiers call on all Occupiers past and present and all Occupy Sydney supporters to assemble at the Occupy site , cnr Martin Pl and Elizabeth St at 6pm Today, 27 February.
Our candlelight vigil will be addressed by an Occupy Wall St participant fresh off the plane from New York City then..
….. the candlelight vigil will be held commemorating the OCT15 occupation and commiserating the unprovoked unforeshadowed and unwarranted attack on Occupy Sydney peaceful protest participants by approximately 100 armed Riot Squad Police using the pretext of enforcing a City “no camping” ordinance. The Raid commander, Assistant Commisioner Mark Murdoch,issued sleeping protesters an order to “take your property & leave within 10 minutes- a physical impossibility for many.
Our candlelight vigil will march and assemble silently outside NSW Parliament to protest the Politically motivated policing of Occupy Sydney. ….....
Following the Vigil The First Assembly of the Peoples Court will assemble for the trial of a local organisation well known for disregarding the interests of workers and clients in the pursuit of ever increasing profits- or an out of control public service working against the will of the people.
“This is what Justice looks like.”
http://occupysydney.net occupysydney.org.au
o
@occupysydney
@occupysydmedia
56a Martin Pl
Sydney NSW 2000
Posted by Occupy Sydney at 02:53 No comments: Links to this post

Occupy to End All Wars

Occupy to End The Arms Race

occupy for peace
The “Occupy” movement, which started in New York towards the end of 2011, has spread around the world and taken root in many states and countries. Simply keeping this movement going over the northern winter has been a huge achievement. Now spring approaches. What can the movement achieve in 2012?
Occupy is first and foremost a movement for economic justice, yet the remedies are not obvious or universally agreed. Defining a clear, coherent set of economic demands is not easy.
However, there's an absolute imperative this year to stop the stampede to yet more evil and unnecessary wars – wars that could, in the worst case, end civilisation as we know it and cause human death on an utterly unprecedented scale.
Plutocrats responsible for bleeding humanity dry are behind these wars. Defeating their push to demolish all remaining source of resistance to their imperialist policies is crucial to overcoming their broader agenda. In any case, peace is its own reward. For the masses , no real economic progress can be made if the 'dogs of war' run free.
The Occupy movement has a chance to make a crucial contribution to the survival and well-being of humanity, by coalescing as a worldwide movement to oppose militarism and war. Demonstrations around the world should become permanent until the warmongers call off their attempt to pitch the planet into yet more catastrophic wars – wars likely to benefit no-one in the long-term.
The USA now boasts the most bloated military machine in the history of the world, with many hundreds of military bases situated in over half the nations on earth. It can only maintain this imperial structure by fleecing the American people and distorting the global economy.
Defeating the war machine is the most direct way to free up the resources needed to trigger global economic recovery and the rebuilding of our economy so it is genuinely sustainable and serve real human needs.
In 2012, let's Occupy Planet Earth for Peace!
written for Occupy Sydney
by Syd Walker
follow @SydWalker on Twitter
please distribute widely
Posted by Occupy Sydney at 14:31 No comments: Links to this post

1% er Rupert Murdochs Daily Telegraph again illustrates News Ltd / News Corps appalling lack of journalistic integrity with this http://m.dailytelegraph.com.au/news/sydney-nsw/shops-pressure-police-to-evict-occupy-sydney-protesters-from-cbd/story-e6freuzi-1226271239083 uncorroborated regurgitation of what police have told them.  As with many stories told as news by Fox / News this piece belongs in the Disney library, or perhaps in some journalism course as an example of bad journalism.
As is dangerously true of many of Australias narrowly held mainstream media outlets, the author has thrown the journalistic requisite of corroboration out the window preferring to simply regurgitate the police assertion.
On January 10th the District Court famously dismissed (on the basis of "no case to answer" ) a charge of illegally camping & staying overnight against an occupy sydney participant. Police assertions were not upheld - because they got the law wrong. IT IS NOT APPROPRIATE TO TAKE THE WORD OF POLICE OR THE SPIN FROM THE POLICE MEDIA UNIT AS TRUTH.
The Telegraph writer did not seek a response from Occupy Sydney participants. Nor is there a single statement from local shop who are reportedly inundating police with complaints.

So again the Murdoch mainstream media act as the State lapdog, supporting politically motivated policing with the usual cocktail of lies halftruths and innuendoes... 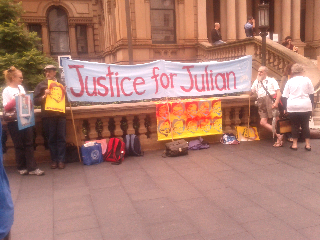 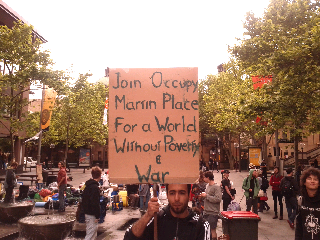 Posted by Occupy Sydney at 12:41 No comments: Links to this post

Posted by Occupy Sydney at 17:55 No comments: Links to this post

The official Occupy Sydney website at http://www.occupysydney.org.au/2012/02/02/occupy-sydney-evicted-from-martin-place-on-its-111th-day-of-occupation-media-release-press-conference-information/ takes another malicious dig at the occupation that site has curiously never recognised existed. If you bother to check the site out the sole reference to Martin Place is a dismissive "Info Desk" in the contacts section. And now the site announces that the occupation it has never recognised existed has in fact been evicted -which it has not.


The Occupy Sydney Occupation still very much exists despite the continued efforts of the official site to undermine our existence. We don't know why. Nor do we really care about their motivations. In truth, NSW Police merely continue their illegal agenda of coming to thieve our property, without receipts, without regard for their own processes. That is all.


To be continually undermined by this website has been an ongoing hindrance to the occupation and I will call at Wednesdays GA for its permanent disendorsement, unless it is placed under the control of completely new people. We occupiers do not need a site which helps police undermine our occupation


Lanz Priestley
Posted by Occupy Sydney at 06:30 2 comments: Links to this post

OccupyPerth and other Occupy groups around Australia and New Zealand have started a campaign against Serco's profiteering off secretive private contracts to provide essential public services. To launch this campaign in Perth we holding an action on March 9, with the support of affected local unions, the Deaths in Custody action group, the Refugee Rights Action Network and Serco Watch. The action will take place outside the Serco office in Perth CBD.
Since Serco are an internationally active company, Occupy Perth would like to propose Occupy Sydney get involved and launch a similar campaign of your own. This group, Serco, is after all one of the biggest, shadiest corporations on the globe and they make most of their profits directly from the tax payer.
On March 9 the OccupyPerth will be collecting signatures for letters to various Government ministers (for one example, see the attached letter to our Health Minister).
We will also be handing out Serco-related leaflets with a request and information on how to "Call your minister" on the following monday, March 12th. These leaflets should give some certified facts and a basic run-down on what to say. We encourage all individual pressure groups involved, as well as other Occupy groups to create their own equivalent flyers and leaflets, reflecting their own local issues with Serco and the relevant local ministers to call. Occupy Perth will cover the general issue of keeping essential Public infrastructure out of profiteering private hands.
We currently have 3 main unifying points for our campaigning around Serco:
1) Keep essential public services in public hands (end privatisation).
2) Full public disclosure on Public-Private bidding processes and public auditing of all Serco contracts.
3) Prevent future profiteering from human misery.
There is just over a month of time to plan, so we would like to test our limits and try make this a well co-ordinated, public campaign. Would be absolutely delighted to have you on board and would especially appreciate any outreach you can do to other anti-Serco groups in your area (I suspect several unions would be in similar positions to ours, in regards to Serco).
Please send any questions or replies to @occupyperth ( Perth )
@chichtweets or @occupysydney ( Sydney )


The Serco Group - the biggest company you’ve never heard of.

-They increase the capacity in these prisons by placing beds in the toilets
-A 14yr old hung himself after being assaulted by an officer this was recorded as the youngest ever death custody
-1994 = $238 Million
-Now = $3 Billion+
Posted by Occupy Sydney at 22:30 No comments: Links to this post