Remember the Lindt Seige? Or just what govt & MSM want you to focus on?

On December 15th Australia waited in anticipation for then treasurer Joe Hockey to make his mid year budget statement. His government who market themselves on fiscal prudence were about to announce a horror $40 billion budget deficit.
Then out of left field a man with a curious history of dealings with government departments appeared out of left field and took hostages in Lindt Café in Martin Place. As in 2001 when the 9-11 distraction turned the political fortunes of the Howard government from oblivion to re-election the Lindt siege was exactly what the Abbott/Hockey government needed to distract the public with fear from the "budget horribilus".

﻿
﻿
Man Haron Monis was investigated by ASIO as many as four times and on an ASIO watch list in 2008-2009 then removed. No reasons are publicly given for his removal. A litany of apparent government systemic failures saw Australia not respond affirmatively to an Iranian government request for his extradition on serious criminal charges and other errors of fortune for Monis which saw him freed on bail on accessory to murder and over 40 charges of sexual molestation which were pending. Was he controlled by ASIO or other government agents? We don't know.
We know first hand that there was a major military training exercise by counter terrorism units at this location on 30 April / 1st May 2013 on the very block where Lindt Café is. The then 24-7 Occupy Sydney  occupation were surrounded by it.
﻿
We do know that the Lindt Café siege which killed two innocent civilians and left Monis incapacitated to tell tales by death, clearly demonstrated the incapacity of Australian State and Federal Police military and security agencies to deal effectively with an apparent lone wolf hostage event. This failure comes 13 years after the 9-11 attacks in New York were used as a pretext to pass a raft of laws which gave police extraordinary powers to deal with much more professionally organised incidents than this. 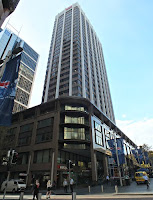 The N.S.W. police response might well have used an episode of the Keystone Cops as an instruction manual, so inept were their responses. Why for example did they not utilise the undoubted skills. The roof of the lower section of the then Westpac building diagonally opposite Lindt café provides an ideal position for a marksman to selectively target an individual in Lindt Café. If police don't have such skills then the military certainly do. Did the failure to deploy such marksmen at this and other available locations sign the death warrants of the innocent Lindt café manager and lawyer whose unfortunate choice of timing put her in the wrong place at the wrong time?
For the Abbott government the Lindt café siege succeeded in taking the heat off them and their toxic budget. Falsehoods such as Hockey's use of the wheat price to justify the budget blowout went unexamined. The mainstream media had world coverage and a rapt publics attention which drove their ratings and advertising value into positive territory. State and federal police were able to use the public fear driven tactics that flowed from the Port Arthur massacre to get more funding and powers to the delight of their political masters. Government should control the people - not the people control the government. As the Liberal National and Labor parties desire the relationship to be.
So on the 15th December 2015 N.S.W. Premier Mike Baird's garish display will commemorate not an act of terrorism on Australian soil but
THE FAILURE OF
AN ENTIRE SYSTEM
TO PROTECT
ITS CITIZENS
Posted by Occupy Sydney at 19:33