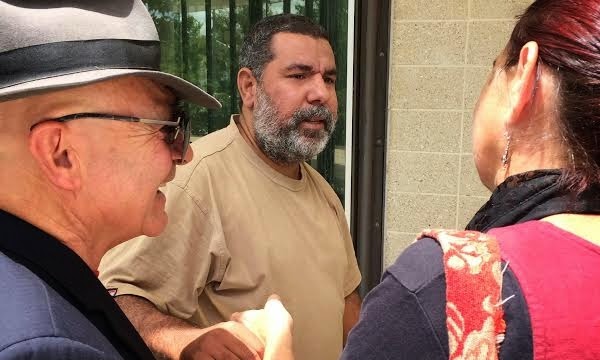 Murrumu Walubara Yidindji, a man in his 40s from the country around Cairns, north Queensland, who last year decided to voluntarily “leave Australia” and live by the tribal law of his Indigenous people, the Yidindji.

Most Aussies are learning now that the jurisdiction known as the Commonwealth of Australia does not yet constitutionally recognise the Aboriginal tribes of the geographical land mass known as Australia. The failure to constitutionally recognise the Yidindji in the foundation legal document of the jurisdiction of the Commonwealth of Australia means that the Yidindji ... are not bound by any of the laws and statutes created by the authority of the Australian constitution.

He renounced his Australian citizenship, returned his passport and Medicare card to the Australian Commonwealth, and sent his driver’s licence back to the chief minister of the Australian Capital Territory, where he then lived. Then Murrumu – who has since returned to live permanently in Yidindji country – quit his job, gave away most possessions and walked away from his bank savings and a superannuation account built up over two decades.
He had, in his words, “abandoned the Australian citizen ship”.

during a visit to the national capital he has, since 2 January, been driving around in YID-001, a car that was, Murrumu says, “licensed to the sovereign Yidindji government” on the first day of the new year.
The number plates are already in use in Yidindji country. But Murrumu said he decided to release YID-001 “in Ngambri (Canberra in Walgalu, the language of the custodians of the plains upon which the national capital is imposed) for the very symbolic gesture that the head office called Parliament House of the Commonwealth of Australia is located there”.

An Australian Capital Territory magistrate has strongly questioned a decision by prosecutors to pursue a trespass-related charge against an outspoken Indigenous campaigner after a dispute over the public housing property he was using for his embassy.
Murrumu Walubara Yidindji, 40, was released from custody on Monday, three days after police charged him with refusing to quit the premises.

at Occupy Sydney we are fully supportive of all grassroots efforts to take back control of personal family community societal and sustainable resource management from an ever invasive and belligerent government. We are especially supportive of indigenous communities who make such choices. As are many, we are watching with interest.We will continue to monitor and report on this issue as it develops.

much content based on or sourced from articles in The Guardian
Posted by Occupy Sydney at 00:34